How to stop nose bleed | Acupressure points for nose bleed

How to stop nose bleed | Acupressure points for nose bleed

The first one is on the inner eye socket where it meets the bridge of nose. Both sides. The second one is under the nose on the philtrum two thirds way up from the upper lip. The third one is on the neck. Right under the skull there is a depression. That’s the third point in the center of the neck.

In general you should lean forward and squeeze shut your nose by pinching the soft part of your nose. Not the hard middle part of your nose because the idea is to let the blood coagulate inside the nose. So breathe through your mouth and pinch your nose for 5-10 minutes and you can combine it with the acupressure points I just showed you with your free hand. Try to keep the nose area cool with ice pack or wet towel if possible. Sticking a tissue in your nose works but it’s not recommended because it sticks to the membrane inside the nose and as you remove the tissue it may remove the scab from the nose and you may start bleeding again.

I remember when I was a kid we were told to put the head backward and tap the back of the neck but we now know you shouldn’t do it because you may be swallowing the blood and that can make you sick too. If the nose bleed doesn’t stop for 20 minutes or so you should seek a medical help. 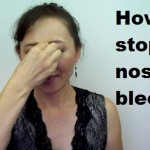