Massage Monday 5-14-12: What is Coining (a.k.a. Scraping or Gua Sha)? Ancient Chinese method of healing

This week I’ll introduce you to Coining which is an ancient Chinese method of healing. It is also called scraping or Gua Sha in Chinese. You rub your skin away from the heart with a coin or other things to bring up the toxins to the surface.

You can do this sitting or lying. Here my friends are doing the coining session. My friend uses Tiger Balm for the gliding and its healing agents and the lid of the Tiger Balm jar which doesn’t have the ridges and smoother than a coin. You can also use a spoon. Darker color means more toxins. The receiver had a cold and was very weak but she gained so much energy after this coining session.

So I had it done too. Even my spine had toxins too. Some parts were sensitive but it did not hurt as it looks. Right after the session you have a dull moment which is typical of getting a massage then it was like waking up the back with new energy.

The only bad part is that it looks ugly and you end up looking like you’ve been abused at home. It varies by person but my bruising went away in 3 days. For that reason I do not recommend having this done one day before you go on a date. Also be careful doing this to your kids because you may get reported for a possible child abuse. 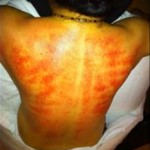 Massage Monday 5-14-12: What is Coining (a.k.a. Scraping or Gua Sha)? Ancient Chinese method of healing. http://youtu.be/3G8wNPkxI1w