Massage Monday 10-8-12: Acupressure point for sneeze – how to stop a sneeze

Sneezing isn’t bad. However, you are sometimes in a situation where you shouldn’t sneeze, such as when you are massaging someone. I once had a massage therapist sneeze on to my back and it was not a pleasant experience.

Today I’ll show you an acupressure point to stop the sneeze. When you feel a sneeze coming, press the area right under the nose into the upper gum. To be more technical, this is called GV26 and it’s located one third of the way down the nose towards the upper lip. But it’s such a small area that when you are pressing with your index finger, you are pressing the point.

If you want to be more discreet than using your index finger, because it looks kind of funny, you can use the side of the finger. Hold it until your sneeze magically disappears.

It took me three times to remember to press this point before the sneeze actually came out but it actually works. 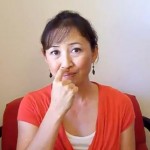