Massage Monday 10-15-12: Acupressure point for fainting and dizziness and sneezing

Last week I showed you the acupressure point to stop the sneeze before it comes out at unwanted times. While your memory is still fresh, this week I want to tell you that the same acupressure point is good for reviving a fainted person.

When you see someone fainted press the point just under the nose, 1/3 of the way down towards the upper lip, into the upper gum and hold it until the person regains consciousness. Of course you can use this point for yourself too. When you feel dizzy or fainting, press it until you feel your energy is restored.

Luckily I’ve never had anyone fainting on me or around me or I’ve never felt dizzy or fainting since I learned this acupressure point but this point has been used for centuries to revive someone who is unconscious. So know this point for sneezing and fainting for yourself and others. 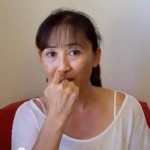